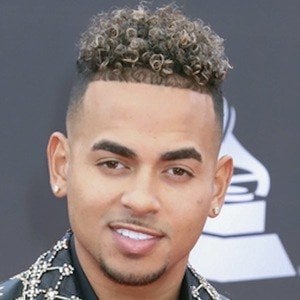 Puerto Rican reggaeton singer who established himself with the single "No Quiere Enamorarse (Remix)." He'd go on to reach international success with massive hits such as "Criminal" and "Taki Taki." In November 2019, he signed a $100 million recording contract with Sony. He's won two Latin Grammy awards.

He began writing songs at the age of 12 and he lived in New York for six years during his teenage years.

In late 2019, he announced he was cast in the blockbuster Fast & Furious 9 by posting a picture with Vin Diesel on his Instagram account. He was featured in Time magazine's 100 Most Influential People in 2019. He set four Guinness records in 2019, including Artist with The Most Videos to Reach One Billion Views on YouTube with seven videos.

His full name is Juan Carlos Ozuna Rosado. He is from Puerto Rico. His father is Dominican and his mother Puerto Rican. He has a daughter named Sofia and a son named Jacob with his wife Taina Marie Meléndez.

He collaborated with DJ Snake, Selena Gomez and Cardi B on the chart-topping song "Taki Taki."