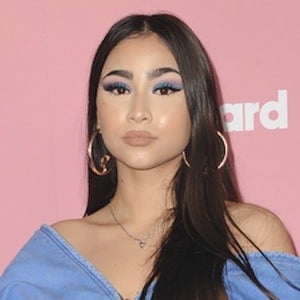 Hip-hop, reggaeton and trap singer who became well known internationally for her 2018 hit single "No Te Enamores". That same year she became the first artist of Chilean roots ever to sign with Sony Music Latin. She released her debut album in November 2020.

She got her start in music at the age of eight. She was discovered by the industry after releasing her song "Not Steady" independently.

In July 2018 she competed in TVN's reality talent show Rojo but she left the show after two appearances. She Her real name is Paloma Castillo. Her stage name was inspired by Drake's Instagram handle @champagnepapi. She's been the face of Pepsi campaigns in Latin America.

Her real name is Paloma Rocío Castillo Astorga. She was born in Manhattan, Nueva York but moved to Santiago, Chile at the age of 16. Her parents are Chilean and their names are Jorge Luis and Andrea Míriam. Her older sister Sofía Castillo is an Instagram star. She has a pet dog named Katio. In May 2019, she began dating Puerto Rican model Roa, who starred in her music video "Fingías."

In September 2019, she collaborated with C. Tangana on the song "No Te Debí Besar."

Paloma Mami Is A Member Of