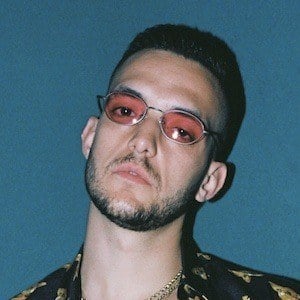 Rapper who became a buzzed-about name in Spanish hip-hop with tracks like "Mala Mujer," "Los chikos de Madriz" and "Antes de Morirme." He is also famous for his work with the rap crew Agorazein.

He was raised in Madrid, Spain. He studied philosophy in college and originally rapped under the alias Crema.

He had a public beef with the political rap group Los Chikos del Maíz, which led to the exchange of several diss tracks.

His real name is Antón Álvarez Alfaro. His mother has 14 siblings. He was in a relationship with Rosalía until May of 2018 and they recorded the song "Antes de que Muera Yo" together.

He's collaborated musically with artists such as Becky G, Paloma Mami and Farruko.

C. Tangana Is A Member Of