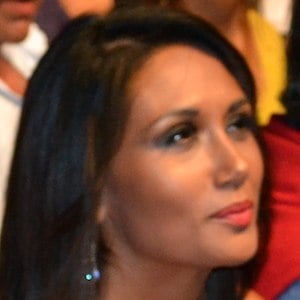 Chilean model and TV personality who is known as The Beast. She first garnered national attention in 1999 after coming runner-up in Miss Mundo Chile, but her career really began when she formed the youth group Mekano. As of 2018, she is the host of the talk show The Night Is Ours.

She began her career at age 15, when she competed on the beauty pageant show Venga Conmigo on Canel 13 in 1996. She received her high school diploma from Liceo Pedro Aguirre Cerda.

In 2005 she was a contestant on The Farm, a reality show that puts a group of 12 people on a farm to live together.

Her parents are Lupe Saldías and Alfredo Díaz. She has two siblings, Paola and Ricardo. She married Fernando Téllez in 2017, and they have one child together, Pascuala. She was married to the soccer player Manuel Neira from 2006 to 2008. They have two children, Trinidad and Mateo.

Jean Philippe Cretton is her co-host on The Night Is Ours.

Pamela Díaz Is A Member Of