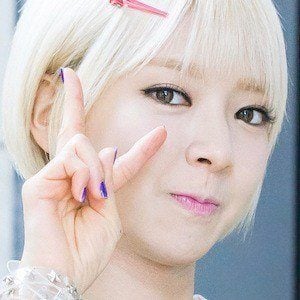 South Korean pop singer and television personality commonly known simply as Choa. She is a member of the K-Pop girl group AOA. Since 2015 she is a main cast member of MBC's reality game show We Got Married.

She was studying aviation business administration at Inha Technical College when AOA member Juniel told her about the girl group. She attended the FNC auditions even though she had failed SM and JYP auditions over 15 times.

In 2013 she played the lead role in the official South Korean stage performance of High School Musical. She also released a solo album that was the official soundtrack to TV Chosun's series Bride of the Century in 2014. She has also been the face of various brands and products since her rise to fame.

Her mother was a piano player and convinced her to play guitar as a child. She has two older sisters.

Park Choa Is A Member Of