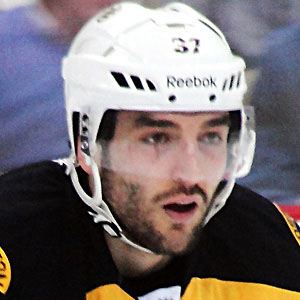 NHL center who helped lead the Boston Bruins to a Stanley Cup Championship in 2011. He became one of the league's best two-way players, winning the Selke Award as the NHL's top defensive forward in 2012, 2014, 2015 and 2017.

He played for the Acadie-Bathurst Titan of the Quebec Major Junior Hockey League before being drafted 45th overall by the Bruins in the 2003 NHL Entry Draft.

He became a member of the exclusive Triple Gold Club, which includes players who have won an Olympic gold medal, a World Championship gold medal, and a Stanley Cup.

He was born in L'Ancienne-Lorette, Quebec, Canada. He married Stephanie Bertrand in 2013, with whom he had a son named Zack in 2015.

He played with Penguins star Sidney Crosby on the AHL's Providence Bruins during the 2004-2005 NHL lockout.

Patrice Bergeron Is A Member Of