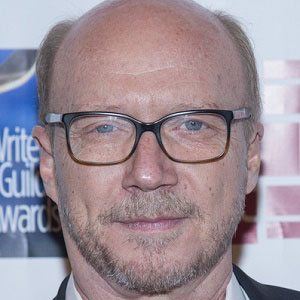 He initially wanted to become a fashion photographer after viewing the 1966 film Blowup.

He co-wrote the script for the 2006 James Bond film Casino Royale.

He married Deborah Rennard in 1997, and he has four kids named Alissa, Katy, Lauren and James. He was an avid member of Scientology until their comments on Prop 8 caused him to leave in 2009.

He wrote the scripts for Clint Eastwood's films Million Dollar Baby, Flags of Our Fathers and Letters from Iwo Jima.

Paul Haggis Is A Member Of