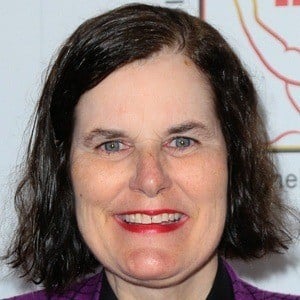 Stand-up comic, actress and commentator whose credits include appearances on shows like Mother Jones, Science Court, Home Movies, and The Rosie O'Donnell Show. She had a series of popular HBO comedy specials in the early '90's and worked as a political correspondent for The Tonight Show during the 1992 U.S. Presidential campaign.

She hit the ground running in 1979, after she secured a few open mic nights at various clubs in Boston.

She has made a number of appearances on NPR's quiz show Wait Wait... Don't Tell Me. She provides her voice for the 2015 Disney animated feature Inside Out.

She adopted three children during the 1990s, but temporarily lost custody in 2001 after she was arrested for performing lewd acts on a minor. She was also later incarcerated for a DUI (while her kids were in the vehicle).

She was once very close friends -- and the occasional performance partner -- of comic and TV host Caroline Rhea.

Paula Poundstone Is A Member Of