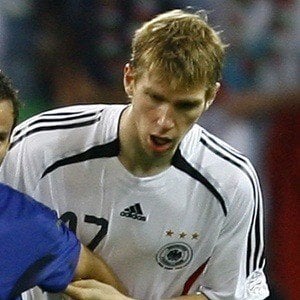 Center back who became a longtime fixture of Germany's national team after debuting in 2004, helping the team win the FIFA World Cup in 2014. He joined Arsenal in 2011 after spending five seasons with Werder Bremen.

He began his professional career with Hannover 96 II in 2003 after playing 7 seasons with the team's youth squad.

He has two children with his wife, professional handball player Ulrike Stange.

He and Bastian Schweinsteiger were teammates on Germany's 2014 World Cup-winning team.

Per Mertesacker Is A Member Of