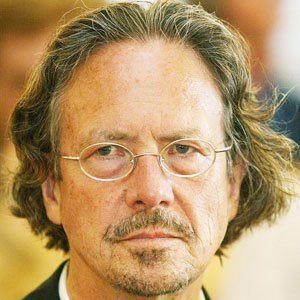 Controversial playwright, novelist, and director who won the Georg Buchner and Franz Kafka Prizes for theater, and became known for his film The Left-Handed Woman.

He attended boarding school at Tanzenberg Castle, where he wrote for the school newspaper.

His 1996 travelogue, A Journey to the Rivers: Justice for Serbia, created much controversy in Yugoslavia, as it portrayed Serbia among the victims of the Yugoslav Wars.

His mother's 1971 suicide is the subject of his play A Sorrow Beyond Dreams.

His award-winning film The Left-Handed Woman was given an infamously negative review by American film critic Leonard Maltin.

Peter Handke Is A Member Of