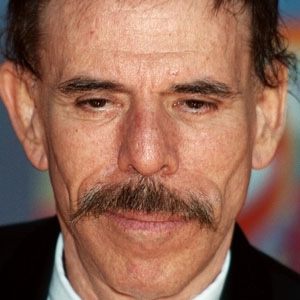 Graphic artist and illustrator known for his psychedelic patterns and colors and use of spectra. He was so popular that 72 corporations licensed his work, leading to appearances on The Ed Sullivan Show and The Tonight Show Starring Johnny Carson, as well as the cover of Life magazine in September 1969.

He studied anatomy, figure drawing, and composition with the famed Frank J. Reilly in 1956 at the Art Students League of New York. He and his friend, Tom Daly, founded their own Manhattan arts studio, The Daly & Max Studio, in 1962.

He created a line of art clocks for General Electric.

He was born into a German-Jewish family and fled Nazi Germany as a child. He spent most of his early years in Shanghai, China. He then moved with his family to Israel in 1948. He married Mary Baldwin.

He and M.C. Escher both created works of graphic art.

Peter Max Is A Member Of