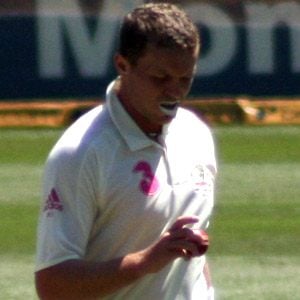 Right-arm fast bowler who became the 15th player to take 200 Test wickets for Australia. He's perhaps most famous for taking a hat-trick on his 26th birthday in 2010.

He began playing club cricket at age 14 with the Latrobe Cricket Club. He was named the ICC Emerging Player of the Year in 2009.

He married Anna Weatherlake in 2017.

He took the wickets of Alastair Cook, Matt Prior, and Stuart Broad to complete his birthday hat-trick. It was also the first Ashes hat-trick by an Australian since Shane Warne in the 1994-1995 Ashes.

Peter Siddle Is A Member Of