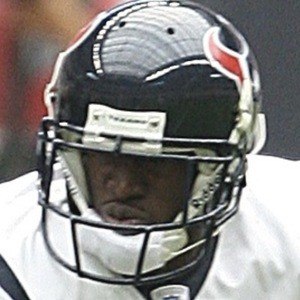 Star of the University of Miami who became an NFL cornerback for a number of teams including the Oakland Raiders and Tampa Bay Buccaneers.

He played college football at the University of Miami, earning All-American honors his junior year, and finishing with seven picks and nearly 500 yards in punt returns.

Drafted by Oakland Raiders in the first round of the 2002 NFL Draft, he was an NFL Rookie of the Week in Week 4 after recording a pick and an 83 yard punt return.

He is the cousin of , a former Pro Bowl defensive end.

He was drafted in the same class as star defensive end Julius Peppers.

Phillip Buchanon Is A Member Of