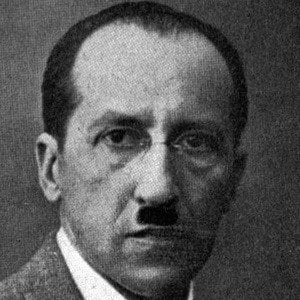 Dutch painter associated with the De Stijl art movement. He was influenced late in life by Cubism and sought to incorporate simplicity into his work by creating two versions of "Still Life with Ginger Pot," one in 1911 and another in 1912.

He attended the Academy of Fine Arts in Amsterdam. He changed the spelling of his name from Mondriaan to Mondrian at some point between "The River Amstel" from 1905 and "Amaryllis" from 1907.

His use of fine lines and primary colors was exemplified in works like "Composition with Yellow, Blue, and Red" from 1937.

His ancestor was Christian Dirkzoon Monderyan who had settled in The Hague in 1670. He was married to Greet Heybroek for three years.

He was influenced by Pablo Picasso.

Piet Mondrian Is A Member Of