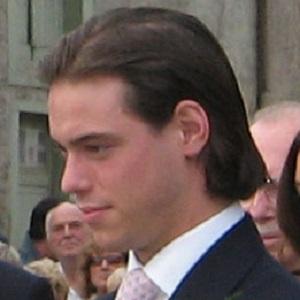 Luxembourg-born member of the House of Bourbon-Parma. He received the title of Prince Felix Leopold Marie Guillaume of Luxembourg upon his birth to Grand Duchess Maria Teresa and Grand Duke Henri of Luxembourg.

After studying briefly at the Royal Military Academy Sandhurst, he worked in the marketing department of a Swiss corporation.

At the age of eighteen, he received Luxembourg's Grand Cross of the Order of Adolphe of Nassau.

In late 2013, he married a German researcher named Claire Margareta Lademacher. They have a daughter named Princess Amalia Gabriela Maria Teresa of Luxembourg and a son whose Prince Liam of Nassau.

He and Prince Harry of England were born just three months apart.

Prince Felix Is A Member Of