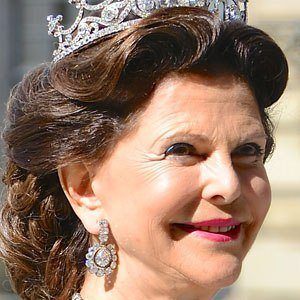 Swedish royalty who assumed the throne as Queen Consort of Sweden in June 1976. In 2011, she set a record being the longest-serving Swedish Queen in history.

She worked as a flight attendant and was the Deputy Head of Protocol for the Winter Olympics in Austria.

Swedish is her sixth language. She is also adept at speaking German, Portuguese, French, Spanish, English and Swedish Sign Language.

Her husband is King Carl XVI Gustaf, whom she met at the 1972 Summer Olympics. They had three children together: Victoria, Philip and Madeleine.

Her youngest child is Princess Madeleine, born in June 1982.

Queen Silvia of Sweden Is A Member Of