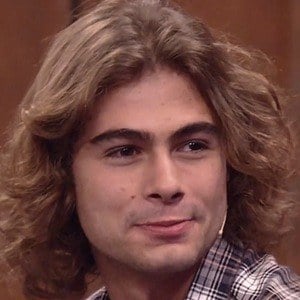 Soap opera actor, musician, and poet known for his leading role in the 22nd season of the popular soap opera Malhação. His book of poetry called Quer se ver no meu olho? was released in September 2015.

He began pursuing acting seriously as a profession when he was 15 years old. He began studying theatre at the University of Rio de Janeiro before taking a leave of absence to me on Malhação. After his stint on the show ended, he returned to his studies.

His on-screen love interest, played by Isabella Santoni, became a real life one that fizzled out soon after the show ended.

He is the son of two actors, João Vitti and Valéria Alencar. His brother Francisco is also an actor.

Rafael Vitti Is A Member Of