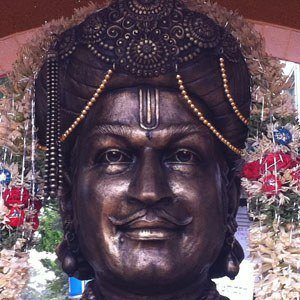 Iconic Kannada film actor and singer who won over a dozen awards and starred in more than 220 films. He has received Best Actor awards for his starring roles in Mayura, Aakasmika, and Gandhada Gudi, among others.

He began his career in theater, acting alongside Gubbi Veeranna. He he made his film debut in the 1954 Kannada film, Bedara Kannappa.

He was kidnapped in 2000 in the middle of the night by the notorious outlaw Veerappan. His subsequent 108-day ordeal made headlines across the country.

He married the influential film producer Parvathamma, with whom he had five children.

He co-starred with Vishnuvardhan in the 1973 Kannada feature Gandhada Gudi.

Rajkumar Is A Member Of