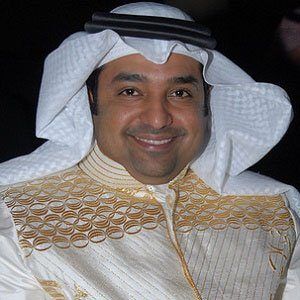 He co-wrote his early material with his music teacher and mentor, Hamad Al-Hamad. Al-Majed's debut album, Aah Ya Qalbi, was released when he was just fifteen years old and included the popular single "Al-Barha."

His 1996 album Safwat Malook Al-Arab is patriotic in theme and was written in collaboration with singer Mohammed Abdu and lyricist Prince Khalid bin Faisal Al Saud.

Members of a Muslim family with Bahraini and Saudi Arabian roots, he and his six siblings spent their early years in Manamah, Bahrain and Dammam, Saudi Arabia.

He and Kadim Al Sahir became two of the Middle East's most respected singers.

Rashed Al-Majed Is A Member Of