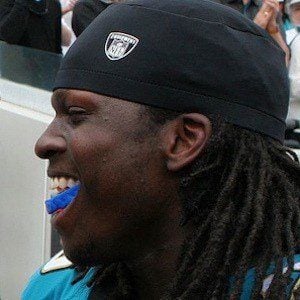 Free safety in the National Football League who was most successful as a pro during his 2010-2015 stint with the Cincinnati Bengals. He was the interceptions co-leader, a Pro Bowl selection and named Second-team All-Pro in 2015. He joined the Oakland Raiders in 2016.

He won a national championship in 2006 while playing for the University of Florida and earned consensus All-American honors. The Jacksonville Jaguars drafted him in the first round of the 2007 NFL Draft.

He earned an associate degree from Coffeyville Community College in Kansas before transferring to Florida.

His sister Lynisha played basketball for Florida Tech while his brother Michael is a teacher. He lost his mother to breast cancer weeks before he and the Gators won a national championship.

He was a member of the Cincinnati Bengals secondary alongside Pacman Jones.

Reggie Nelson Is A Member Of