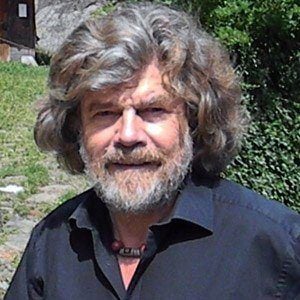 Recognized as one of the world's most accomplished mountain climbers, this outdoor adventurer and prolific author was the first person to climb Mount Everest alone and without the aid of oxygen. He also climbed the world's fourteen, over eight-thousand-meters-high peaks and wrote more than sixty books about his experiences.

His love of mountain climbing developed during his childhood in the Italian Alps, and he started embarking upon major mountain expeditions when he was just thirteen years old. He first scaled peaks in the Himalayas in the early 1970s.

A politician as well as a mountain climber, he became an Italian Green Party Member of the European Parliament in 1999.

He and his eight siblings grew up in northern Italy as the children of a German-Italian schoolteacher father. On many of his early climbs, he was accompanied by his brother Günther.

He and American-born adventurer Conrad Anker both became known for their tremendous mountain climbing feats.

Reinhold Messner Is A Member Of