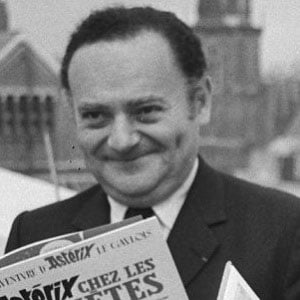 Famous for his work on the popular Lucky Luke, Asterix, and Iznogoud comic book series, this French author and cartoonist published his comics in Pilote and Tintin magazines during the 1950s, 1960s, and 1970s.

The son of Polish Jews, he was born in Paris, France, and raised primarily in Buenos Aires, Argentina. In his early twenties, he served in the French Army and was tasked with creating poster art for the military.

He was the 1974 recipient of a Swedish international cartoonists' honor known as the Adamson Award.

Following their 1967 wedding, he and his wife Gilberte Pollaro-Millo welcomed a daughter named Anne. Sadly, he died of a heart attack when his daughter was only nine years old.

He and artist Albert Uderzo collaborated on the popular Asterix series of comic books.

Rene Goscinny Is A Member Of