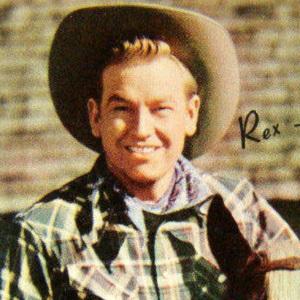 Actor known as "The Arizona Cowboy" who starred in numerous Disney Westerns and nature films, earning him a star on the Hollywood Walk of Fame.

He got his first guitar from his father, at age 11, and after high school a brief stint on the rodeo circuit, went to sing on the radio.

After becoming a popular singer with his 1949 hit, Afraid, he signed with Republic Pictures to make more than a dozen musical westerns.

He grew up in Mud Springs Canyon, near Willcox, Arizona, where his father performed in local functions playing the fiddle. His son, , became a popular country singer.

Slim Pickens was a common co-star of his in the Republic Pictures films.

Rex Allen Is A Member Of