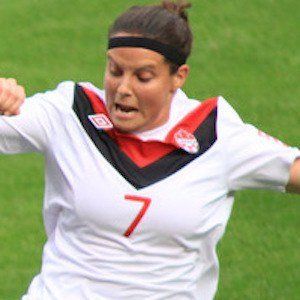 Canadian international defensive back who won a bronze medal for her country at the 2012 Olympic Games. She also competed at the 2007 and 2011 Pan American Games, winning bronze and gold, respectively.

She grew up playing hockey and rugby along with soccer and played college soccer at the University of Tennessee.

Over her career, she's played in the W-League, Toppserien, and National Women's Soccer League. Also a musician, she's played with the Suzuki Strings Orchestra.

She was born to Shan Evans and Keith Wilkinson in Pointe-Clare, Canada.

She and Diana Matheson have played together on the Canadian national team.

Rhian Wilkinson Is A Member Of