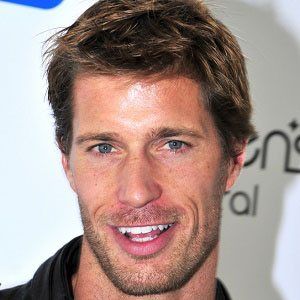 Model, actor and designer who joined the design team of ABC's Extreme Makeover: Home Edition in the fall of 2007. Television acting credits of his include Baywatch Nights, General Hospital, Passions, Ugly Betty, CSI and CSI: Miami.

He was in his junior year at the University of Colorado when a modeling agent discovered him. He would work as a model in Milan, Paris, Barcelona, London, Sydney, New York, Miami and Los Angeles.

He was featured in a 2005 episode of America's Next Top Model as a male lingerie model.

He was born Robert Duane Hillis in Suffern, NY and raised with his two sisters and one brother in Newton, MA. He was previously married to Melissa Blackler who he married four days after they met. They separated in 2008.

He married dancer Elena Grinenko in 2012 who he met through ABC while she was working on Dancing With the Stars. They have sons named Magnus Zander Hillis and Odin Harley Hillis.

Rib Hillis Is A Member Of