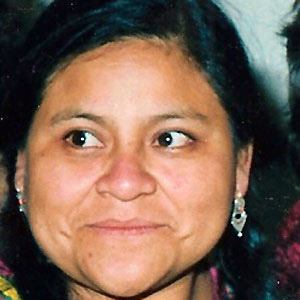 A Nobel Peace Prize-winning author and activist, she worked to raise awareness of the suffering of Guatemalans during the 1960-1996 Civil War. Her published works include I, Rigoberta Menchu and Crossing Borders.

She grew up in a poor indigenous family in a small town near El Quiche and attended Catholic boarding school. She later became the president of a pharmaceutical company that provided low-cost drugs.

In addition to the Nobel Peace Prize, she received the prestigious Order of the Aztec Eagle.

She was born in the north central Guatemalan village of Laj Chimel. Her father, Vicente Menchu, was of K'iche' descent.

She received the Prince of Asturias Award in 1998. Bob Dylan earned this same honor in 2007.

Rigoberta Menchú Is A Member Of