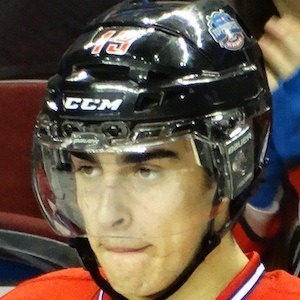 2014 first round pick (21st overall) of the St. Louis Blues who made his NHL debut in 2015, when he was 19. He established himself as a solid contributor in his rookie season, scoring just shy of 40 points.

He spent three years with the Guelph Storm of the Ontario Hockey League, scoring 171 points in 147 games.

His play in the OHL earned him a spot in the 2014 CHL/NHL Top Prospects Game. He won a gold medal with Canada at the 2015 World Junior Championships.

He was born to Len and Stefani Fabbri and has a brother named Lenny.

Robby Fabbri Is A Member Of