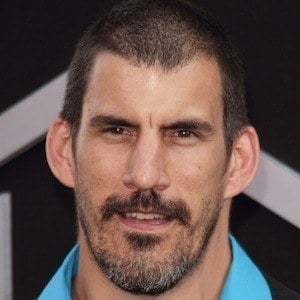 Actor and former professional wrestler who is known for his various appearances in Hollywood films. He is particularly known for his imposing stature. He gained widespread recognition for his Kurrgan in-ring persona for the WWE.

He first performed as a professional wrestler in the Japanese W*NG promotion as Goliath El Gigante. He debuted for the then-World Wrestling Federation (WWF) in 1997 as The Interrogator.

He was born and raised in Sainte-Marie-de-Kent, New Brunswick, Canada. He is of Acadian descent. On June 13, 1997, he married his wife Laura Eaton, with whom he has two step-daughters and one adopted daughter.