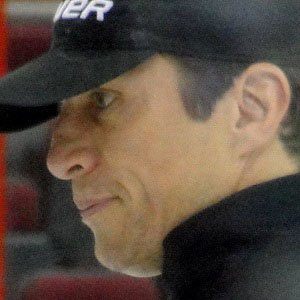 NHL center who led the Carolina Hurricanes to a Stanley Cup Championship in 2006. He was selected to his only All-Star game in 1992 as a member of the Philadelphia Flyers and he received the Selke Trophy for the game's top defensive forward in 2006 and 2007.

He earned the nickname Rod the Bod at Michigan State University for his near-fanatical devotion to working out.

He became the assistant coach of the Carolina Panthers after retiring.

His parents are Bob and Linda. His second wife, Amy Biedenbach, was daughter of the former University of North Carolina basketball coach Eddie Biedenbach.

He and Conn Smythe winner Cam Ward keyed the Stanley Cup Championship run for the Hurricanes in 2006.

Rod Brind'Amour Is A Member Of