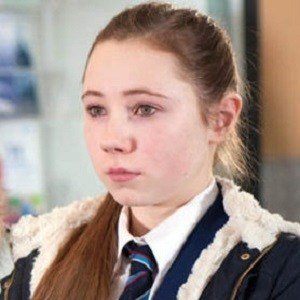 British actress who broke into the television industry in a big way by making her professional acting debut as series regular Peri Lomax in the long-running soap opera Hollyoaks.

She first appeared on Hollyoaks in 2013.

She starred in a 2014 TV mini-series called Tom's Life in her same role as Peri from Hollyoaks.

She was born in Warrington, Cheshire, England. She has a brother named Billy.

She and Amanda Clapham both debuted on Hollyoaks in 2013.

Ruby O'Donnell Is A Member Of