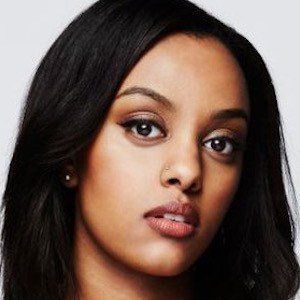 Canadian singer who first became known as Vine star. She released her debut album EP, The Intro, in November of 2015. By the time Vine was shut down, she had more than 2 million followers.

She kicked off her career on Vine in May of 2013 with a video called "Walking into messy room when all you wana do is sleep." She started off as more of a video blog Viner before she started featuring music more.

She frequently showed only her hands playing the piano in her Vine videos. Her debut single, "Lost Boy," went 3x platinum in Canada and 2x platinum in the United States.

She was born Ruth Berhe. She featured her mother and brother in videos on Vine.

She was an admirer of Viner SpecialK.

Ruth B Is A Member Of