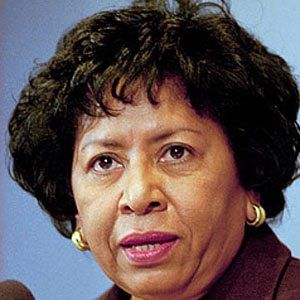 Before becoming President of Brown University in 2001, this Africana Studies and Comparative Literature scholar served as President of Smith College and held various teaching and administrative positions at the University of Southern California, Princeton University, and Spelman College.

After graduating from Dillard University in Louisiana, she earned advanced degrees in Romance Languages and Literature from Harvard University.

While at Brown, she led a billion-dollar effort known as Boldly Brown: The Campaign for Academic Enrichment.

She and her eleven older siblings grew up in Grapeland, Texas, as the children of Fanny Campbell Stubblefield and Isaac Stubblefield. Her marriage to Norbert Alonzo Simmons resulted in children named Khari and Maya.

In 2009, she was appointed by United States President Barack Obama to the President's Commission on White House Fellowships.

Ruth Simmons Is A Member Of