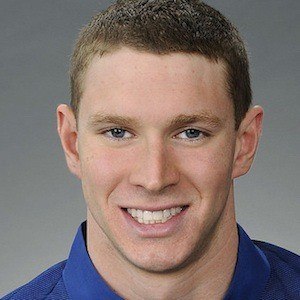 Olympic gold medal swimmer who captured the prestigious piece of hardware at the 2016 Rio Games in both the 100-meter and 200-meter backstroke events. He previously won gold in medley events at 2012 and 2015 World Championships.

He won his first international medals in 2011 when he placed third at the Lima World Junior Championships and third at the Guadalajara Pan American Games, both in the 200m backstroke event.

He was a member of the Bolles School Bulldogs in Jacksonville, Florida before attending the University of California, Berkeley and becoming a multi-NCAA individual national champion.

He was born in Chicago, Illinois and raised in Jacksonville, Florida. He and his older brother and sister, Patrick and Shannon, have parents named Pat and Katy Murphy.

He broke the American record for fastest time in the 200-yard backstroke that was previously set by Ryan Lochte.

Ryan Murphy Is A Member Of