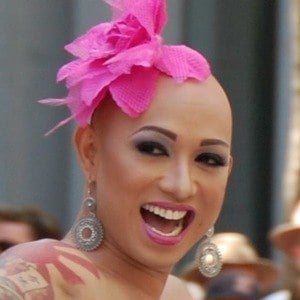 Drag queen known for being on RuPaul's Drag Race, where she was one of the first reality stars to admit to being HIV positive. She also created the web show Hiv+Me, where she talks to people about living with HIV.

She first discovered drag when living in New York City and worked at Lucky Cheng's.

In conjunction with her HIV-awareness activism, she's worked with OraQuick, which made the first oral HIV test. She has over 120,000 Twitter followers and 500,000 Instagram followers.

She was born in the Philippines and moved to the US in 1994. She's lived in Seattle, New York, and Los Angeles.

She and Nina Flowers were both on season one of RuPaul's Drag Race.

Ryan Ong Paolo Is A Member Of