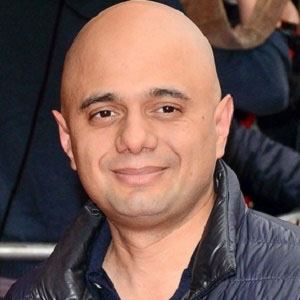 After beginning his service as a Member of Parliament for Bromsgrove, this Conservative Party politician held the offices of Economic and Financial Secretary to the Treasury; Minister for Equalities; and Secretary of State for Culture, Media, and Sport.

After earning degrees in politics and economics from the University of Exeter, he became the vice-president of New York's Chase Manhattan Bank and went on to head the Deutsche Bank.

He and Rehman Chishti were the first two Conservative Members of Parliament of Pakistani heritage.

He was born in Lancashire, England, to a Muslim family (although he, himself, chose not to practice any faith). He and his wife Laura became parents to four children.

He and fellow Conservative Party politician Justin Tomlinson both began serving in Parliament in 2010.

Sajid Javid Is A Member Of