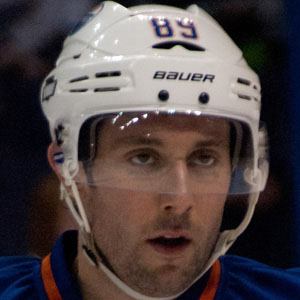 NHL center who was drafted sixth overall by the Edmonton Oilers in 2007. He played in the NHL YoungStars Game in 2008.

He finished his rookie season with the OHL's London Knights fifth in the league in scoring.

Internationally he played on the Spengler Cup-winning Canadian squad in 2012, and took the silver medal in the 2008 World hockey Championship.

His father Dave Gagner spent 15 seasons in the NHL, playing for half a dozen teams.

He tied Jari Kurri's Oilers record of most points in a single period, with five.

Sam Gagner Is A Member Of