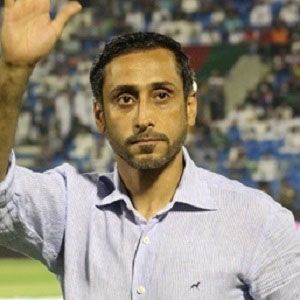 Striker who is considered one of the greatest goal-scorers in Saudi Arabia's history, scoring 46 international goals from 1992 to 2006. He appeared in four straight FIFA World Cups and spent two decades as a member of Al-Hilal.

He was born in Riyadh, Saudi Arabia and came up through the youth system of Al-Hilal before making his senior debut with the club in 1988.

He became the manager of Al-Hilal in 2013 and led the team to a Saudi Federation Cup title that season.

He has children named Rima and Abdullah.

He was teammates with Yasser Al-qahtani on the Saudi Arabian team at the 2006 FIFA World Cup.

Sami Al-Jaber Is A Member Of