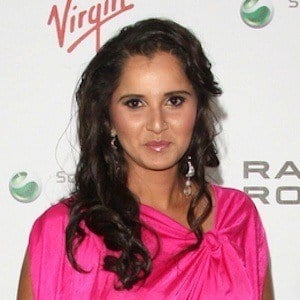 Dominant professional tennis player from India who has held number one rankings in both singles and doubles play.

She began playing tennis at the age of 6, training with her father and in 2003, she began competing professionally.

She was the first female Indian tennis player to surpass $1,000,000 in total earnings.

She married Shoaib Malik in 2010. Her father, Imran Mirza, was a sports journalist and strict Muslim. She has younger sister named Anam.

She was named one of the "50 Heroes of Asia" by Time magazine in 2005. Mahatma Gandhi was at the top of the list.

Sania Mirza Is A Member Of