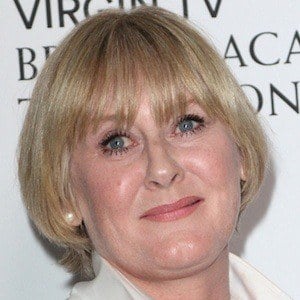 Initially famous for her portrayal of Raquel Wolstenhulme in the popular British soap opera Coronation Street, she went on to play Yvonne Kolakowski in the BBC One series Clocking Off; Ruth Goddard in the ITV drama Where the Heart Is; and Sergeant Catherine Cawood in the BBC One crime program Happy Valley.

After training at London's Guildhall School of Music and Drama, she began her professional acting career and taught at Salford University.

She won a British Academy Television Award for her supporting role in the television series Last Tango in Halifax and an Olivier Award nomination for her starring role in the London stage production of Betty Blue Eyes.

The daughter of screenwriter Geoffrey Lancashire, she spent her youth in Oldham, England. Before ending in divorce, her marriage to Gary Hargreaves produced two children; she later married TV producer Peter Salmon, with whom she subsequently had a son.

Sarah Lancashire Is A Member Of