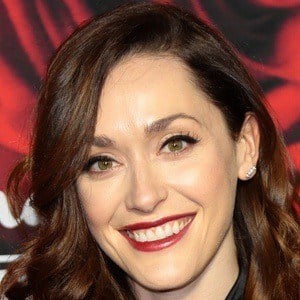 Canadian television star recognized as Pawter Simms in Killjoys, Lucy Henry in Wild Roses, and Abigail Pershing in Good Witch. She also had a recurring role in 2016's American Gothic.

A dancer as a child, she began taking acting lessons at the age of fourteen. She would later study at Ryerson University's theatre school.

In 2008, she appeared in both the movie musical Repo! The Genetic Opera and the horror film Saw V.

She was born to Eunice Power in St. John's, Newfoundland and Labrador. She married Peter Mooney in 2017.

In the Hallmark series Good Witch, she stars opposite Catherine Bell and Bailee Madison.

Sarah Power Is A Member Of