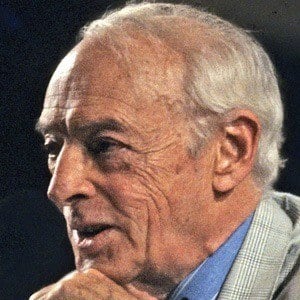 Canadian-born American writer who won both the Nobel Prize for Literature and the Pulitzer Prize for Fiction in 1976. His most famous works include Herzog (1964), Humboldt's Gift (1975), and The Adventures of Augie March (1953).

He decided he wanted to become a writer after reading Harriet Beecher Stowe's Uncle Tom's Cabin as a child. He later studied anthropology and sociology at Northwestern University and went on to pursue graduate study at the University of Wisconsin-Madison.

He was the only writer to win the National Book Award for Fiction three times. Herzog, Mr. Sammler's Planet, and The Adventures of Augie March all received the prestigious honor.

He was married five times between 1937 and his death in 2005. His briefest marriages were to second and third wives, Alexandra Tschacbasov (1956-59) and Susan Glassman (1961-64). He was married to his first wife, Anita Goshkin, for nearly two decades; to his fourth wife, Alexandra Bagdasar Ionescu Tulcea, for a decade; and to his last wife, Janis Freedman, for sixteen years.

He was influenced by the timeless work of English playwright, William Shakespeare.

Saul Bellow Is A Member Of