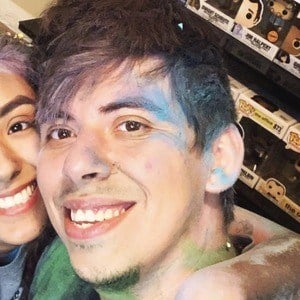 One of two personalities featured on the popular TikTok account Anxiety Couple. He and his partner created the channel to share points of view on the smaller moments of their lives. They are a couple that deals with anxiety, panic disorders, OCD, agoraphobia and other mental health challenges. They also have a popular YouTube channel and Instagram account.

He and his partner created their YouTube channel in November of 2018. They debuted a month later with a video called "THE CANDY KISSING CHALLENGE (GONE WRONG)."

They have earned over 5 million fans to their TikTok account. Their first YouTube video to reach 1 million views was "Telling My Boyfriend Im ACTUALLY Going Bald To See How He Reacts! EMOTIONAL."

His fiancé Haydee was already a mother before they began dating. He and Haydee share an additional child, a son named Skylr.

He and Haydee created a couple's YouTube channel like Katie Betzing and Josh Brueckner of Jatie Vlogs.

Jonathan Scott Anxiety Couple Is A Member Of