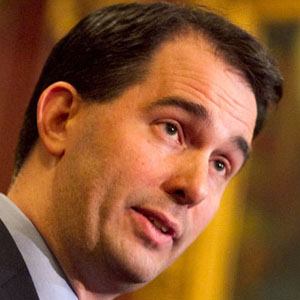 After serving from 2002 until 2010 as Milwaukee County Executive, this Republican politician took office as Wisconsin's 45th Governor.

After studying at Marquette University during the late 1980s, he worked for both IBM and the American Red Cross.

From 1993 until 2002, he represented Wisconsin's fourteenth district in the State Assembly.

He grew up in Colorado, Iowa, and Wisconsin as the son of a Baptist minister father and a bookkeeper mother. He married Tonette Marie Walker in 1993; they have sons named Alex and Matt.

He and United States Congressman Steve Gunderson are both politicians from Wisconsin.

Scott Walker Is A Member Of