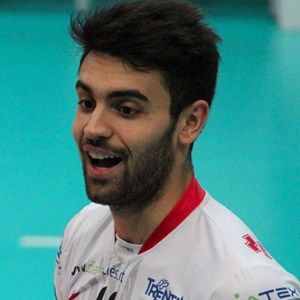 Volleyball middle blocker who has risen to fame as a gold medalist with the Argentinian national team, including at the 2015 Pan American Games. He competed with his home country at the 2012 and 2016 Summer Olympics, and finished as the best middle blocker at the FIVB World Cup.

He earned his first call-up in the Argentinian youth system in 2007. He later earned his senior team debut in 2010 at the FIVB World League.

He helped lead Italian club Trentino Volley to victpry at the 2014 Italian SuperCup and 2015 Italian Championship. He finished as a gold medalist with Argentina's national volleyball team at the 2017 Pan American-Cup.

He was originally born and raised in Rosario, Argentina.

He and Facundo Conte have played as teammates for Argentina's national volleyball team.

Sebastián Solé Is A Member Of