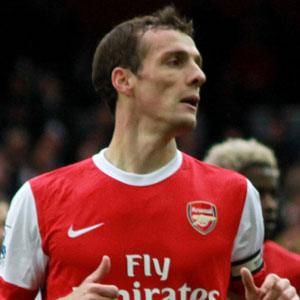 French soccer best known as a key player on title-winning Ligue 1 teams like Lyon and Monaco. He was included in the National Union of Professional Footballers Ligue 1 Team of the Year in 2004.

He spent a decade playing for FC Seynois before turning professional with Sporting Toulon at age sixteen.

The soccer stadium in his hometown of La Seyne-sur-Mer, the Stade de Squillaci, is named in his honor.

He has been married and has a son named Aaron.

He was managed by Raymond Domenech on the French national team during the 2010 FIFA World Cup.

Sebastien Squillaci Is A Member Of