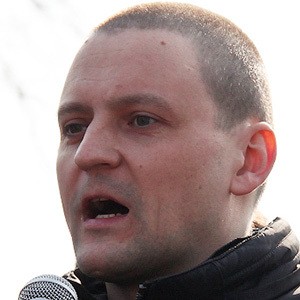 Russian political activist who came to prominence as the unofficial leader of the Vanguard of Red Youth (AKM). He was sentenced to 4 1/2 years in a penal camp for organizing a 2012 protest against President Vladimir Putin.

He graduated from Moscow State Academy of Water Transport in 1999.

His supporters have helped his personal Twitter page reach more than 130,000 followers.

His father is historian Stanislav Tiutiukin. He and his wife Anastasiya have sons named Ivan and Oleg.

He made a name for himself as a well-known political activist from Russia like Ilya Yashin.

Sergei Udaltsov Is A Member Of