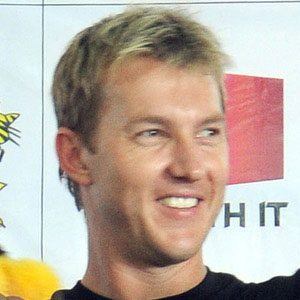 Former Australian cricketer nicknamed Binga who was considered one of the fastest bowlers in international play. He became a commentator for Channel Nine after retirement.

He was named the Australian Test Player of the Year in 2008. He retired with 310 Test wickets and 380 ODI wickets and scored more than 1,000 runs in both formats.

He got divorced from Elizabeth Kemp in 2009; the couple had a son named Preston together. He married Lana Anderson in 2014.

He was teammates with Ricky Ponting on the Australian cricket team.

Brett Lee Is A Member Of