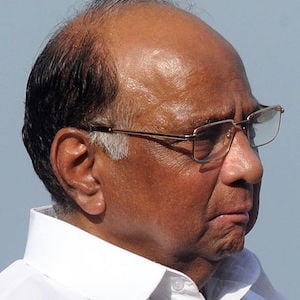 Indian politician who founded the Nationalist Congress Party in 1999 and served as Indian Minister of both Agriculture and Defense. He began representing Madha in Indian Parliament in 2009.

He first entered Indian politics in 1967, as a Congress Party member of the Maharashtra legislative assembly.

He once served as President of the International Cricket Council.

He was born into a family of ten children, and he had one daughter with his wife, Pratibha Shinde.

He served as a Member of the Indian Parliament for Baramati during the administration of Indian Prime Minister Atal Vajpayee.

Sharad Pawar Is A Member Of