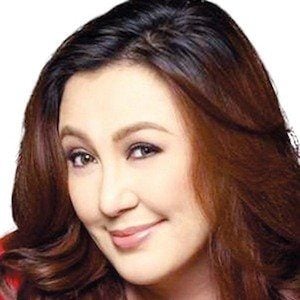 Known as The Megastar of Philippine Entertainment, she has released over 40 albums and acted in over fifty films. Her popular hits include "To Love Again," "Mr. DJ," and "Naaalala Ka."

She released her first album, DJ's Pet, in 1978. One of her first singles was called "Tawag ng Pag-Ibig."

She has also found success as a TV host, winning the 2011 Best Lifestyle Show Host Award.

She was married to Gabby Concepcion from 1984 to 1987 and in 1996, she married Francis Pangilinan. Her daughters KC Concepcion and Frankie Pangilinan also became singers.

She appeared alongside John Estrada in the 2009 movie BFF: Best Friends Forever.

Sharon Cuneta Is A Member Of