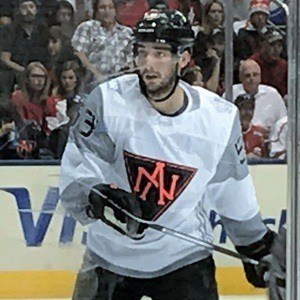 NHL defenseman who tore through the league in his rookie season with the Philadelphia Flyers, recording 17 goals and 29 assists in only 64 games. He had a 15-game point streak during the course of the 2015-2016 NHL season, setting a league record for a rookie defenseman.

He anchored the Union College blue line for three seasons and capped his career with three points and a plus-7 rating in the 2014 national title game, a 7-4 win for Union.

Along with his point streak, he also set a rookie record by scoring four goals in overtime. He was named a first-team All-American as a senior in college and won two awards from the Flyers organization at the conclusion of his first year.

He was born to Regis and Christine Gostisbehere. His father was a jai alai player and he has a sister named Felicia who competed in figure skating.

Shayne Gostisbehere Is A Member Of